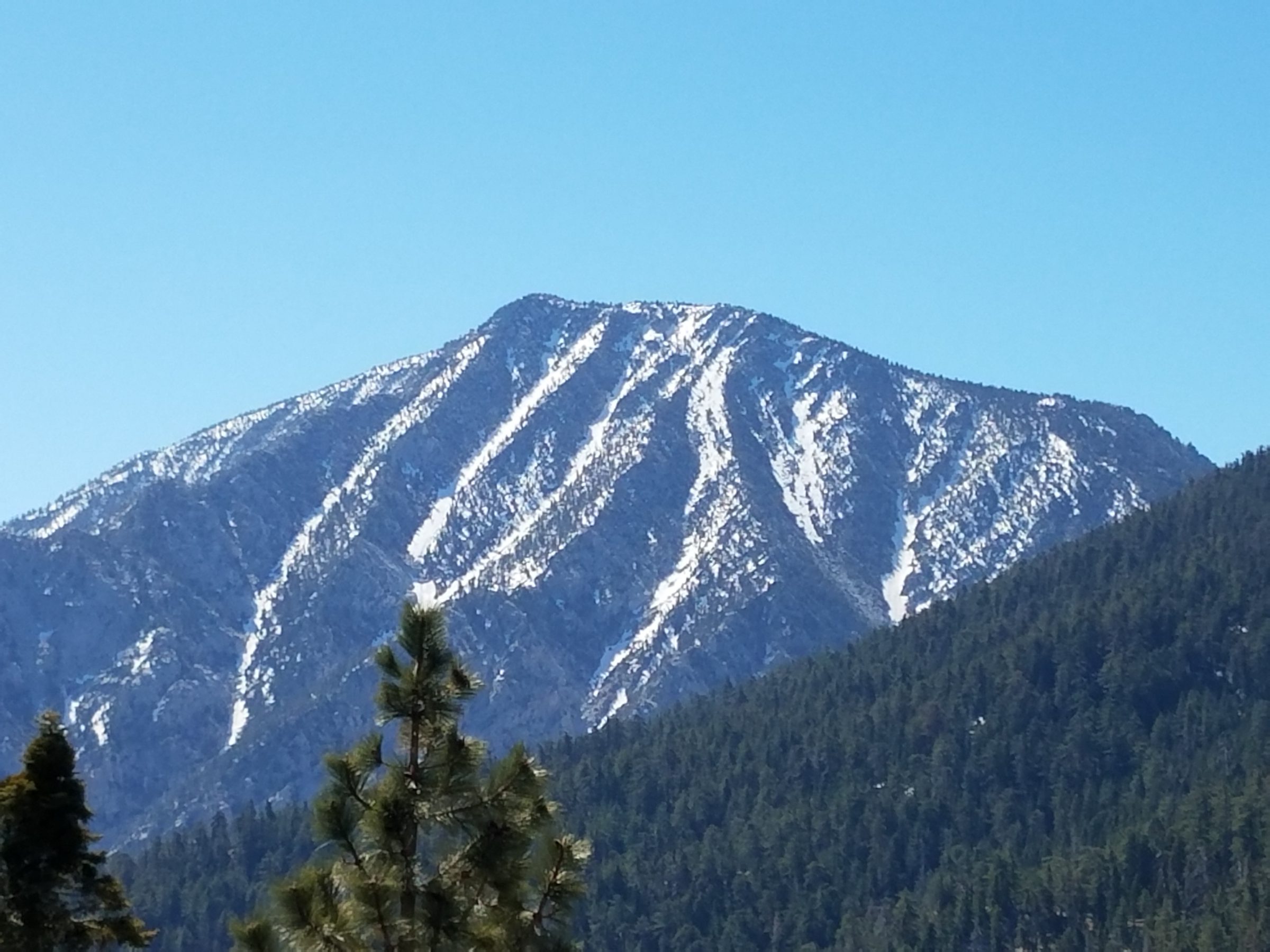 From San Jacinto State Park via road to Humber Park, up Devils Slide Trail to PCT at mile 179 then on to mile 187.5.  About 14 miles total.

I slept in a bit and didn’t start walking until 7.  First up through the town with a stop for coffee and a bagel.   It was 3 miles to the trailhead, most of it steep up.   The Devils Slide Trail is 2.6 miles of switchbacks connecting to the PCT at about 8,000 feet.

Mt San Jacinto is beautiful.  Steep, rocky, with big pines and still sporting snow in spots.  As the trail ascended to 9,000 feet areas of snow became more frequent.  The snow was very hardpacked and dirty.

The trail loops around to the west of the mountain and there, where afternoon sun hits, most of the snow was gone.  As it rounded to the north side there were more sections of snow.  I never put my microspikes on because it was constantly changing from snow to clear ground.

I made bad time today, though I did climb 4,000  feet.  Late in the afternoon I approached the north fork of the San Jacinto River.  This was above 8,000 feet so it is just a tiny stream.  It was in a snow covered area and there was a steep bank down to it where there was a large rock just above a 4 foot fall in the stream.

I tried to manage my way down but slide and nearly went into the stream.  I got a leg on the rock but my pole was jammed in above my head and I was just hanging on.    After a bit I managed to get my pole free and use it to brace myself and then climb the rock.

On the other side, checking for damage and getting the snow off my butt two more hikers approached.  The first handled it flawlessly but the second did what I had done but worse.  If not for his pals help he would have been in trouble.   He did scrape up his arm.

Fuller Ridge, supposed to be the really difficult in the snow section was next up.  Since I was tired and had fallen once I decided to camp for the night and tackle it in the morning with fresh legs.  Camped at 8,600 feet at the north end of Fuller Ridge.  Could be in for a windy and chilly night. 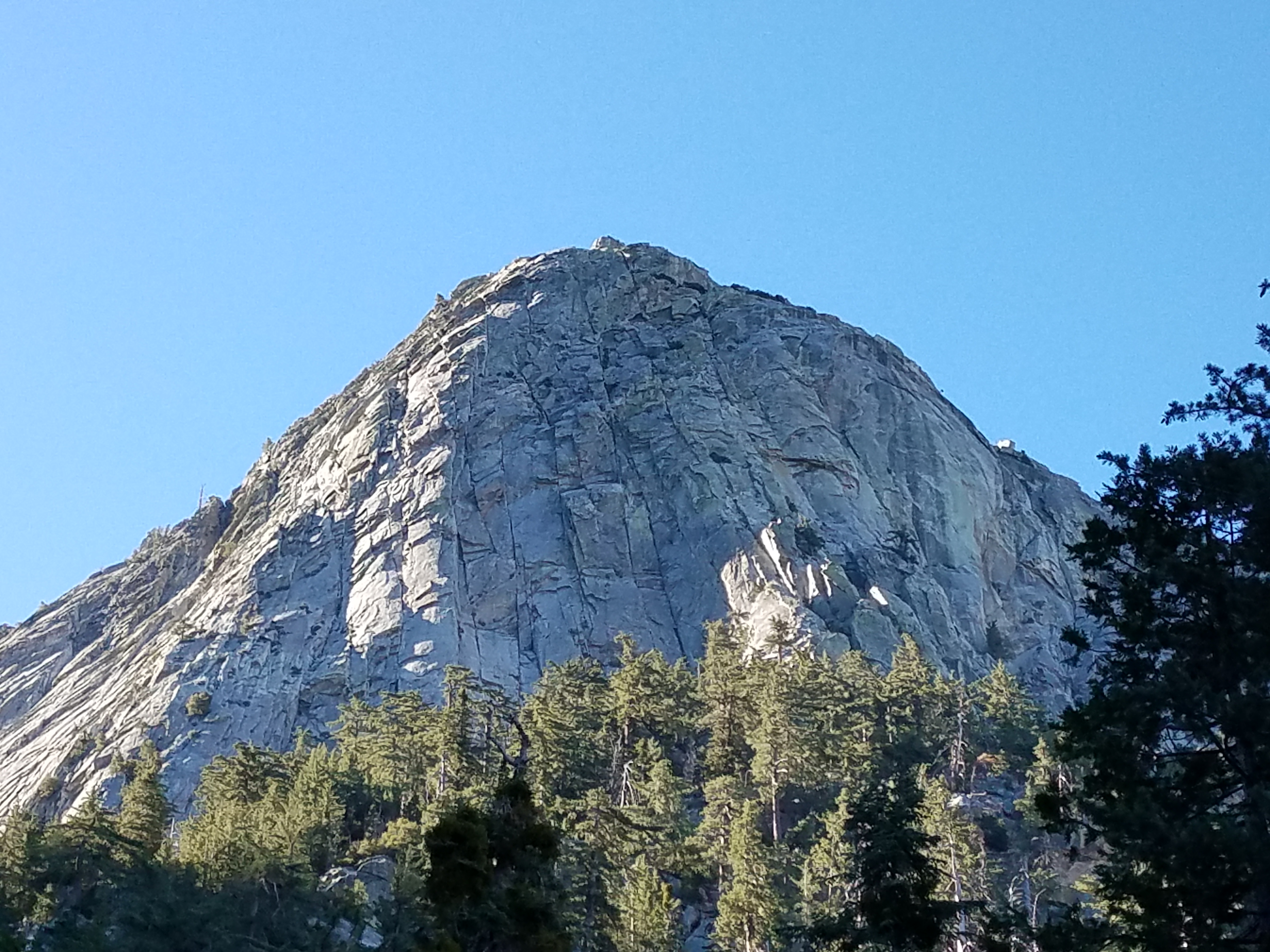 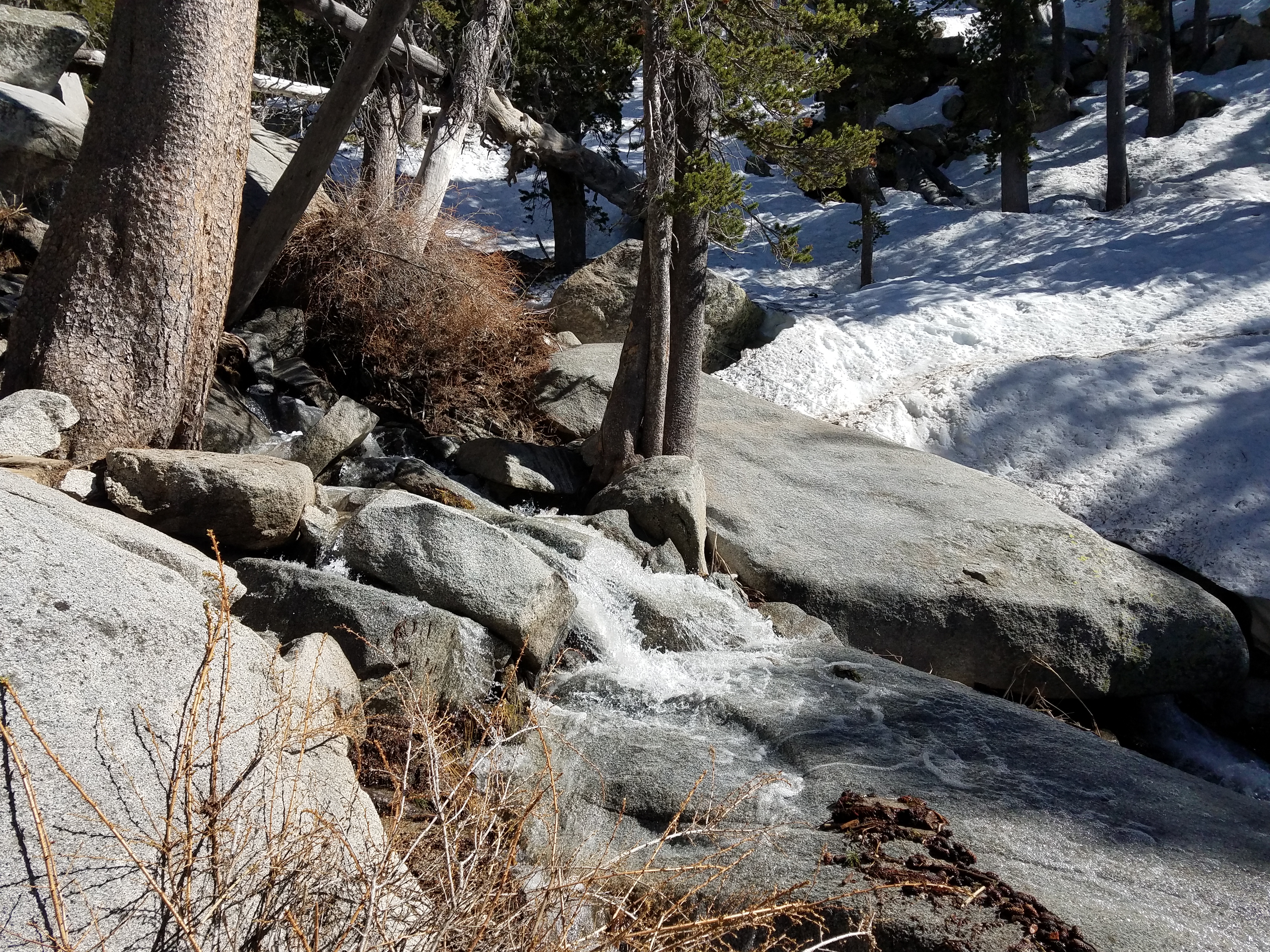 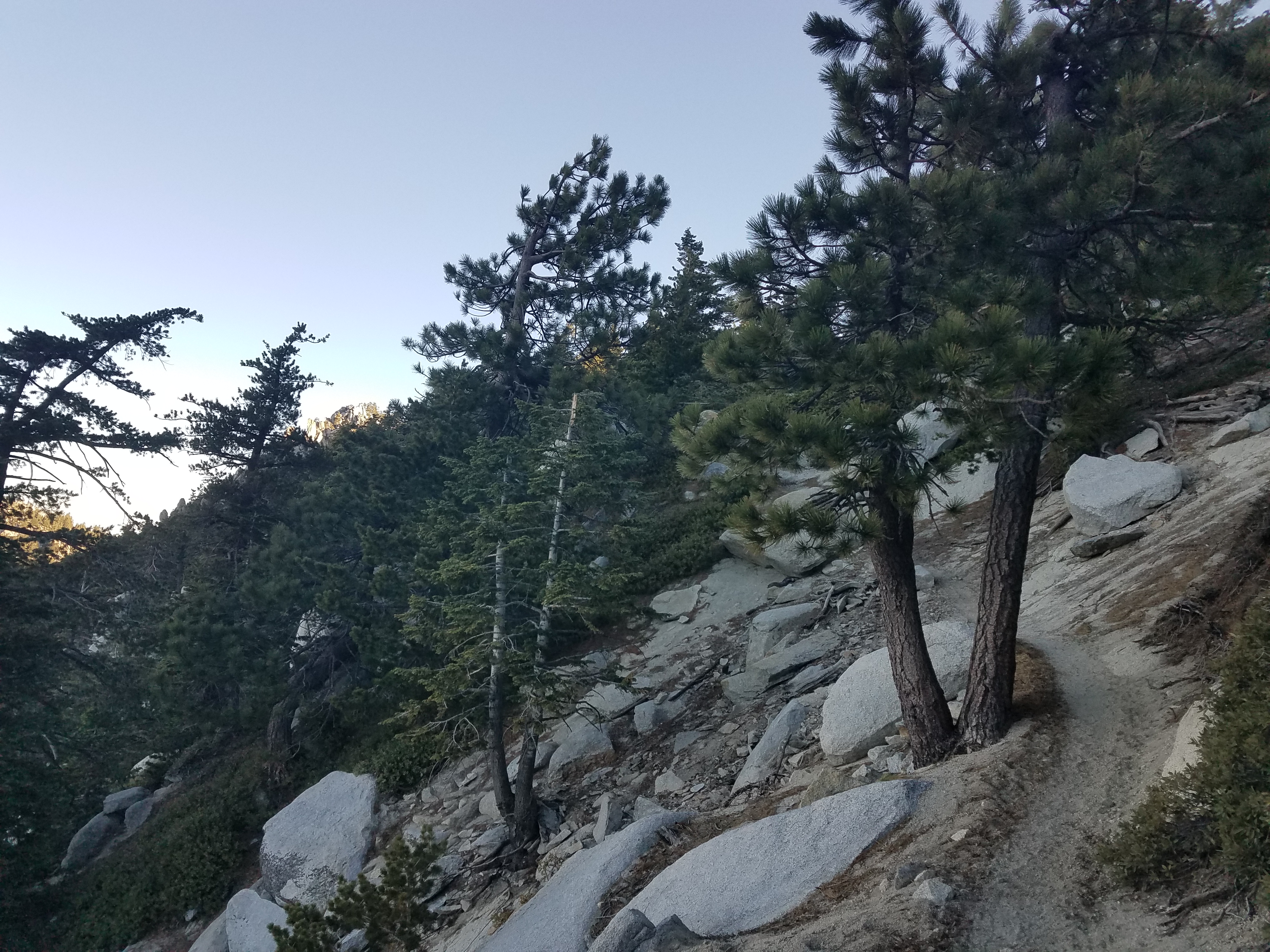 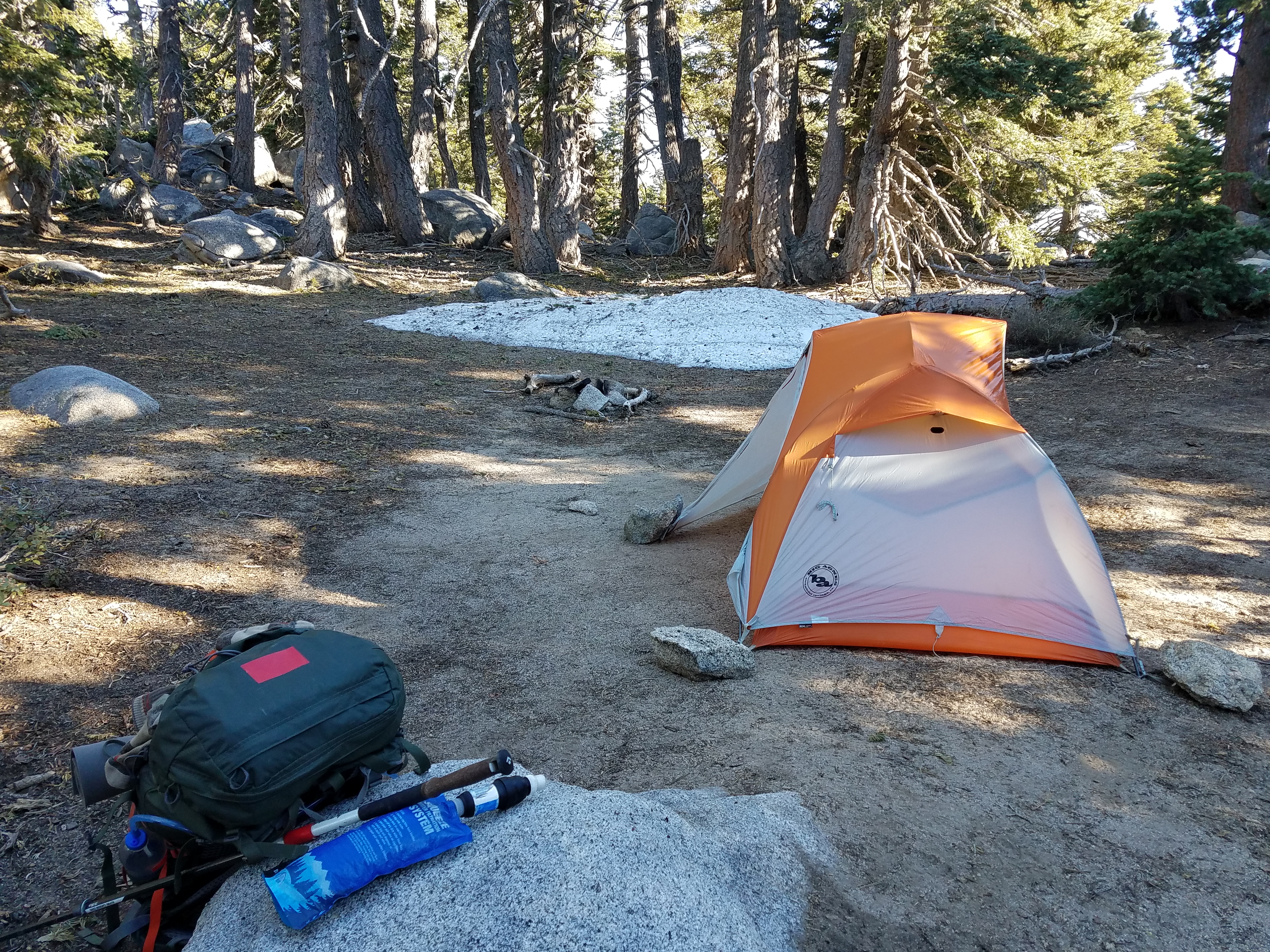